Ad-tech, which stands for advertising technology, broadly refers to the various analytics and digital tools used in the context of advertising. There has been a continuous development and enormous growth in the field of ad-tech. The ad-tech domain has grown to be one of the most effective ways for businesses of all sizes to expand their reach, find new customers, and diversify their revenue streams. The ad-tech domain has grown enormously in almost every country of the world, and Singapore is no exception to this. The Republic of Singapore is widely known as one of the most competitive and innovative economies of the world.

The Intellectual Property (IP) framework of Singapore is very comprehensive and is generally considered to be one of the most thorough in Asia. Owing to the strong IP framework of Singapore, companies operating in Singapore not only protect their core inventions, trade names or taglines but also believe in building strong Patent Portfolios that revolve around their core inventions. In addition, the companies that plan to operate in Singapore in future are also very serious about having strong Patent Portfolios revolving around core inventions. 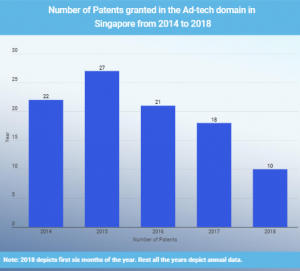 We, at Intense IP Services Private Limited, provides end-to-end IP Support Services and helps its clients build and commercialize Patent Portfolio. You can rely on our team of highly experienced IP Professionals, who work in partnership with premier law firms from across the globe. To know more, please visit us at www.intenseip.com or send an email to info@intenseip.com

Ad-tech in Singapore – An Overview

Rahul has been working in the field of Intellectual Property Rights for almost two years. He is well versed with different aspects of Intellectual Property. He has vast experience in drafting patent applications in different domains such as electronics, electrical, chemical, mechanical, software and many more. He has a considerable amount of experience in drafting responses to office actions for US jurisdiction. In addition, he has experience in performing patent searching for Patent Infringement cases.